A bus caught fire on Sunday morning  of  04/08/2018 on the stretch of Via Dutra through Resende, in the south of Rio de Janeiro. According to the Federal Highway Police, the vehicle belong to the sertanejo singer , Léo Magalhães. The incident happened near km 326, towards São Paulo, at the height of the district of Engenheiro Passos.

Also according to the PRF, the bus had been seized in an inspection of the National Land Transport Agency (ANTT), along São Paulo area, and was being driven to the retention yard of the organ, when there was an engine overflow and caught fire.

At that moment, only the driver was in the vehicle and he managed to get out in time and unharmed. The fire totally consumed the bus. Firefighters were called and they were able to stop the flames. No one was injured.During this time,the road to Sao Paulo was closed and cause about 3km of traffic Jam while the road to Rio de Janeiro was partially blocked and at about 10 .40 am ,the traffic was back to normal .

The Press Office of  Léo Magalhães issued a clarification note on the according to them,the bus was under the responsibility of ANTT, National Land Transport Agency. On April 7th Saturday afternoon,, the vehicle had been seized for lack of passenger list. The singer’s team returned from a show in Espírito Santo and headed to Jundiaí / Sao Paulo where Léo Magalhães performed a night  before.
Due to the apprehension of the bus, in Rezende / RJ, the team moved to the city of Jundiaí by van.
Luckily the bus was without passengers when it caught fire, on the way to the patio in Aparecida do Norte. The driver who drove the vehicle was designated by ANTT and is well.Léo Magalhães laments about the episode and says he is relieved that no one was hurt .
By Niyi Fote 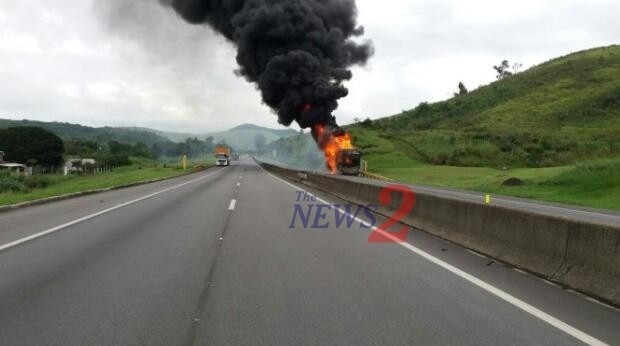 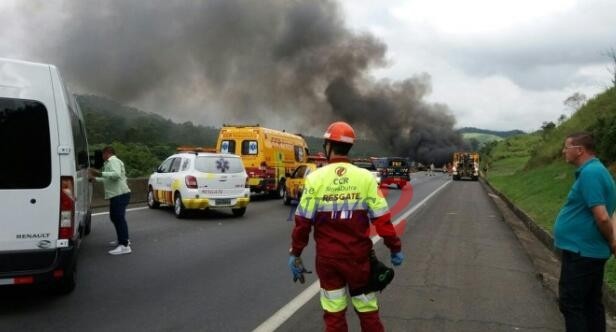