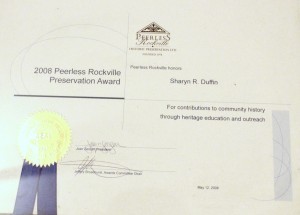 one of the awards recieved by Sharyn Duffin
Photo Niyi Fote 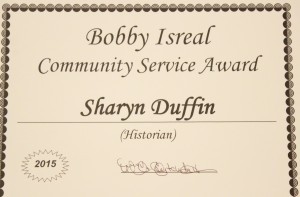 Another Award for Sharyn Duffin.
Photo Niyi Fote
” Who`s helped making the county provide basic services like streets lights, for her Lincoln Park Neighborhood.”
Sharyn Duffin, a blind black volunteer who has lived all her life in the Lincoln Park neighborhood of East Rockville. She is in her 60s; currently unemployed but has a degree in History which she uses mostly as a volunteer.
She got sick and became blind since high school because of spinal meningitis; but this has never stopped her from doing what she loves doing most for more than 30 years-seeing to the betterment of her neighborhood of Lincoln Park of Rockville. Even with her health limitations, she still volunteered and made efforts in making sure the county provides basic needs for her neighborhood and its residents… For her, “Rockville is a very nice place to live and very diversed and our neighborhood Lincoln Park was annexed into the city in 1949.” She and others had appealed to the county to provide basic services like street lights, paving the streets, but they didn’t keep up with their promise until 1954 when new officers were sworn in. So, it wasn`t easy but they finally got what they wanted.
Moreover, “In 1974,I wrote a first History of Afro American bicentennial commission which was included in the book, council of government published and I have investigated several researches and several incidence pertaining to the black community in Rockville and our neighborhood started a very well known legal case that affected all of us” she said.
On her project for the month of black history, “I was part of a group that put together an exhibit, that would be in Rockville Library and it`s about 19th century education for Blacks. Public schools were established in 1872 in Maryland and what we know is that between 1864 and 1876, several black communities established their own schools.”
“ I think, young black people need to get more involved, they need to know where we come from, because if we are not careful, their folks will like to get their country back “take their country back” that will include taking away your rights, so very odd one, so they need to be involved, they need to take a room of pride in themselves” She said.
She thinks the black people have a very rich history in this area and she would like it to be better known.
Sharyn Duffin is actually an icon and she had received many awards for her contributions to the welfare and betterment of her neighborhood-Lincoln Park in Rockville.
According to Yvette Yeboah Schools, the community center supervisor of the Lincoln Park Community Center “she`s got all the historical information of Rockville in her palms. She comes here most of the time to read and tell stories and historical things to the kids and even during the last Christmas.”
We need more people like Duffin helping and caring for their people and neighborhoods and that way, we make a better society.
Sharyn continues to be a volunteer and a reference to be reckon with in her neighborhood.
Niyi Fote